Ways to watch TV via Internet

Now that the UK free to air TV channels have virtually disappeared in parts of Europe, what ways can I watch TV and what should it cost? 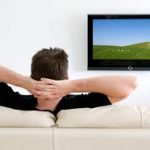