XP ‘end of life’ –what does that mean? 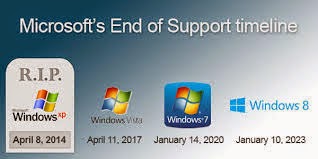 Microsoft recently announced that XP will no longer receive support from April 8th 2014. As XP is 13 years old it’s surprising I fact they previously wanted to kill it off but public outcry meat it was deferred. Finally we have reached the point where it’s no longer supported.
What does that mean for business and end users still running XP? Well don’t panic it won’t just stop working. It just means it’s no longer supported for updates and security breaches. In reality it just means those computers running Windows XP are more at risk, more vulnerable to virus attacks and backdoor attacks. Even ant virus companies will start to phase out support for XP meaning again less protection. New software won’t take into account the XP requirements.
If you run the same few programs and don’t connect to the internet using XP then you’re safe enough. But really this should be a wake-up call to start budgeting for replacement equipment. Jump rather than waiting to be pushed. My advice is to plan now to replace your aging machine for something new.
Right now you can do a couple of things to bolster your system. 1) Stop using Internet Explorer –it’s horrible, slow and not as secure.  Use Chrome or Firefox which are free and will give you better performance. 2) Check your anti virus software for its continuing support, some are popping up with notices about XP EOL so if necessary change it for another free version that doesn’t annoy you with popups such as Avast, Avira, ClamWin etc., But don’t leave it too long to make a proper change.
Most likely your XP machine cannot be upgraded to Windows 7 or Windows 8 as the new systems need better hardware and it is not going to be viable in most cases to use the old equipment. Right now we still build new PC’s with Windows 7 licenses as that’s still the best and easiest version of Windows around.
Tags: end of XP XP